So, a year ago I made a post about my “one-word theme” for 2019, and even though 2019 is far from over in a lot of ways, today felt like an excellent day to come back to it. I found a note card tucked in the back of my notebook, and I had written down all the ways I would know if I was truly being BOLD in 2019. It was a wish list in a lot of ways, but they all required work. I couldn’t be passive or vague about any of them: 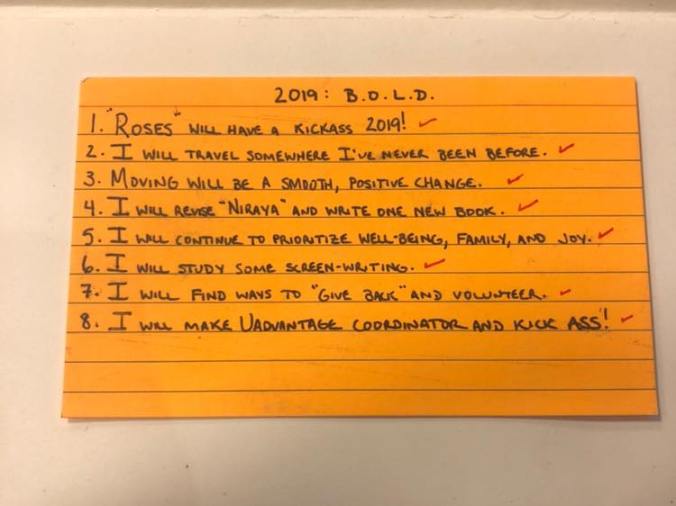 Looking back on this list today, I have to wonder a little about the Law of Attraction. Have you heard of this before? The way it was first explained to me, my boss in college told me to, “Tell the universe what you want, and the universe will deliver.” At the time I really wanted to study abroad and go to Italy, but I wasn’t sure I could ever afford it. I told her, “I hope I can make it happen.”

“No,” she told me. “Don’t say you wish or you hope. Say you WILL go to Italy. Then you’re putting it in the universe, and by the Law of Attraction, it will come to you.”

I think about that a lot these days, especially when I look back on my “Year of Bold” card. The thing is: I forgot about this card for most of the year. I tucked it in the little pocket at the back of my notebook, and it disappeared from my memory until today. When I read it, had to smile, because all of these things happened in one way or another.

Yes, some were simple: “I will study some screen-writing.” All that took was a simple textbook purchase. Others involved a lot of little layers, and sometimes, lucky timing. They didn’t all happen in ways that I imagined they would. Technically, #8 never happened at all. I interviewed for a new job that actually ceased to exist. But a few weeks later, a job I never saw coming opened up. It was a very similar description, lived in the same office, and it was even better suited for me. I’ve been there for about eight months now, and I still can’t believe the way it all worked out. It’s perfect.

Writing was interesting. My idea well was dry for a lot of the year. The words came at a slow drip, if at all. I worried that I had written my last book. But in September, I dusted off a manuscript I’d forgotten about, and now, ROSES IN THE DRAGON’S DEN has a sequel on the way. It’s drafted, contracted with cover artists and editors, and three months ago, it only existed as a a few chapters and a dead idea.

The Law of Attraction means different things to a lot of people. Some invoke magic. There’s talk of the idea that our thoughts have mass and physically influence the world around us. There’s always the religious implications as well. As for me, I’m open-minded, but I’ve boiled it all down to this: When you tell the universe what you want and you’re willing to work for it, it will answer in one of three ways:

As for 2020, I haven’t chosen a word or made my list yet, but I look forward to editing Books 5 and 6! I continue to embrace the challenges and rewards of writing and in my day job. I know I have another house move on the horizon, which isn’t to say the last moves weren’t a needed change.

As we get ready for a new year and a new decade, give this a try. Come up with a word that means something to you, and tell the universe what you want. Write it all down. And if you’re willing, share your word in the comments! I could use some ideas 😉

Wishing you a wonderful December!

One thought on “Year of BOLD Revisited”